Chris Anstey’s departure as Melbourne United coach just one game into the season has brought Melbourne’s media to United’s doorstep and some of the statements reached mocking levels, SEN today asked listeners ‘Should Melbourne United’s longest serving coach been able to double his record.’, 65% said that Anstey should of been given the chance instead of his United stint ending at just one game.

The Herald Sun slammed Melbourne United with the headline ‘United No More’ with a picture featuring Darryl McDonald, David Barlow, Chris Anstey and team owner Michael Slepoy looking downcast on the sidelines during Sunday’s game while a cartoon showing Anstey in a net saying ‘Time Out’ was also shown in the article while The Age also weighed into this chaotic situation even as United said they’ll undertake a nationwide search for a new coach . 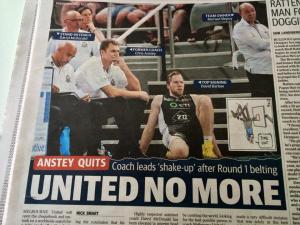 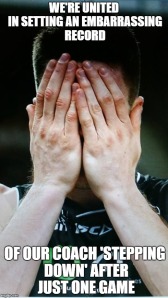