There have been many wisecracks made since the end of the game with many wondering if Darryl McDonald will be coach on Sunday against the NZ Breakers after Chris Anstey ‘stepped down’ after coaching United for just one regular season game, United will be playing at the Margaret Court Arena and Bet365.com is being really generous giving United ($1.87) shorter odds than New Zealand ($1.95) who is currently 2-0 compared to United’s 0-2 while TAB Sportsbet has both sides at $1.90 each.

It will be interesting to see if Melbourne United do honour any of the past Victorian NBL teams with jerseys ranging from the rafters (or outside the court like the Tigers ones at Hisense Arena) or not, while hanging famous jerseys is considered a good gesture it is considered meaningless by many for the numbers aren’t retired and in many eyes an honoured player is known by both name and number. 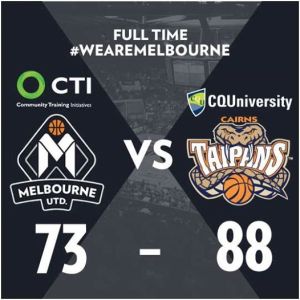