Skip to content
HomeIs United controlling what is said?

Melbourne Tigers fans reading the newspaper today would of been amused at the sight of seeing the Melbourne Tiger beside the Cairns Taipans logo for the game coming up on Sunday instead of Melbourne United’s logo.

Amusement would of turned to amazement when looking below the picture and seeing Mark Worthington’s comments would of noticed that his comments on the Tigers situation were word for word to comments made by Chris Anstey earlier this week when he was live on SEN with him answering a text message submitted to the station by a Melbourne Tigers fan, those who want to see Mark Worthington’s words can see them below while Chris Anstey’s appearance on SEN can be heard here.

The word for word usage by Worthington and Anstey has lead to questions of whether or not that Melbourne United has a tight leash on what players, coaching staff and other members of the organization are allowed to say to the media and other outlets.

We Are Not United thank all the fans who provided us with the information and pictures for this article. 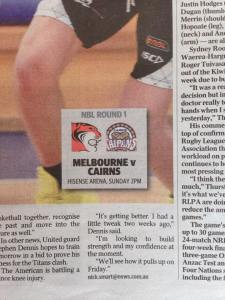